A Day at Dickinson – 1 Day Trip 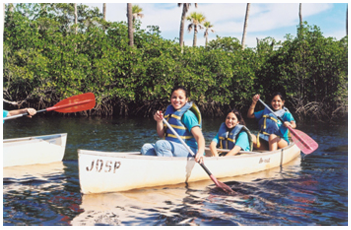 Visit the area where legendary Quaker leader Jonathan Dickinson lived and where his shipwrecked party struggled to survive! Students voyage past the Jupiter Lighthouse to Hobe Mound, where they discover the endangered plants and animals of the Florida scrub, the first of many ecosystems we’ll visit on our journey. Traveling through Jonathan Dickinson State Park, we’ll see scrub give way to pine flatwoods. Gopher tortoises wander through the saw palmettos as we reach the canoe dock. After a brief lesson, we’ll canoe the scenic Loxahatchee River, looking out for ospreys and viewing the effects of saltwater intrusion as we weave along the edge of the mangroves and study the bare spires of ancient cypress trees. We’ll also learn all about Trapper Nelson: his unusual lifestyle, mysterious death and hidden treasure! 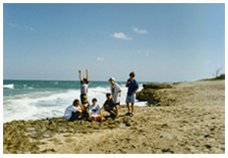 Next, we’re off to for the Jupiter barrier island to explore a coastal ecosystem and observe the geologic formation, Anastasia limestone. Walk through the coastal hammock arriving at the sand dunes where we will examine a barrier island in its natural state. On the beach experience the sights of very unusual rock formations, explore tidal pools, at low tide, and examine the diverse organisms making the intertidal zone their home. Before heading back to school, we’ll stop at the Marinelife Center on Juno Beach for an in-depth study of sea turtles on their way to recovery. What an incredible opportunity to observe these elusive marine animals.

SC.5.E.7.2 Recognize that the ocean is an integral part of the water cycle and is connected to all of Earth’s water reservoirs via evaporation and precipitation processes.

SC.8.N.1.4 Explain how hypotheses are valuable if they lead to further investigations, even if they turn out not to be supported by the data. SC.8.P.8.8 Identify basic examples of and compare and classify the properties of compounds, including acids, bases, and salts.

SS.8.G.2.1 Identify the physical elements and the human elements that define and differentiate regions as relevant to American history.

SC.7.L.16.1 Understand and explain that every organism requires a set of instructions that specifies its traits, that this hereditary information (DNA) contains genes located in the chromosomes of each cell, and that heredity is the passage of these instructions from one generation to another.

SC.912.L.15.13 Describe the conditions required for natural selection, including: overproduction of offspring, inherited variation, and the struggle to survive, which result in differential reproductive success.

SC.7.L.17.1 Explain and illustrate the roles of and relationships among producers, consumers, and decomposers in the process of energy transfer in a food web.

SC.7.L.17.2 Compare and contrast the relationships among organisms such as mutualism, predation, parasitism, competition, and commensalism.

SC.8.L.18.1 Describe and investigate the process of photosynthesis, such as the roles of light, carbon dioxide, water and chlorophyll; production of food; release of oxygen. SC.912.L.14.8 Explain alternation of generations in plants.

SC.912.L.14.10 Discuss the relationship between the evolution of land plants and their anatomy.

SC.912.L.17.2 Explain the general distribution of life in aquatic systems as a function of chemistry, geography, light, depth, salinity, and temperature.

SC.912.L.17.9 Use a food web to identify and distinguish producers, consumers, and decomposers. Explain the pathway of energy transfer through trophic levels and the reduction of available energy at successive trophic levels.

SC.912.E.7.8 Explain how various atmospheric, oceanic, and hydrologic conditions in Florida have influenced and can influence human behavior, both individually and collectively.

SC.5.L.14.2 Compare and contrast the function of organs and other physical structures of plants and animals, including humans, for example: some animals have skeletons for support — some with internal skeletons others with exoskeletons — while some plants have stems for support.

SC.5.L.17.1 Compare and contrast adaptations displayed by animals and plants that enable them to survive in different environments such as life cycles variations, animal behaviors and physical characteristics.

SC.6.L.15.1 Analyze and describe how and why organisms are classified according to shared characteristics with emphasis on the Linnaean system combined with the concept of Domains.

SC.7.L.15.2 Explore the scientific theory of evolution by recognizing and explaining ways in which genetic variation and environmental factors contribute to evolution by natural selection and diversity of organisms.

SC.7.L.15.3 Explore the scientific theory of evolution by relating how the inability of a species to adapt within a changing environment may contribute to the extinction of that species.

SC.912.L.17.3 Discuss how various oceanic and freshwater processes, such as currents, tides, and waves, affect the abundance of aquatic organisms.

SC.912.L.17.6 Compare and contrast the relationships among organisms, including predation, parasitism, competition, commensalism, and mutualism.

SC.6.E.6.1 Describe and give examples of ways in which Earth’s surface is built up and torn down by physical and chemical weathering, erosion, and deposition.

SC.6.E.6.2 Recognize that there are a variety of different landforms on Earth’s surface such as coastlines, dunes, rivers, mountains, glaciers, deltas, and lakes and relate these landforms as they apply to Florida.

SC.7.E.6.2 Identify the patterns within the rock cycle and relate them to surface events (weathering and erosion) and sub-surface events (plate tectonics and mountain building).

SC.7.L.15.1 Recognize that fossil evidence is consistent with the scientific theory of evolution that living things evolved from earlier species.

SC.912.E.6.2 Connect surface features to surface processes that are responsible for their formation.

SC.912.E.6.4 Analyze how specific geologic processes and features are expressed in Florida and elsewhere.

SC.6.P.13.1 Investigate and describe types of forces including contact forces and forces acting at a distance, such as electrical, magnetic, and gravitational.

SS.5.G.1.2 Use latitude and longitude to locate places.

SS.6.G.1.1 Use latitude and longitude coordinates to understand the relationship between people and places on the Earth.

SS.6.G.1.4 Utilize tools geographers use to study the world.