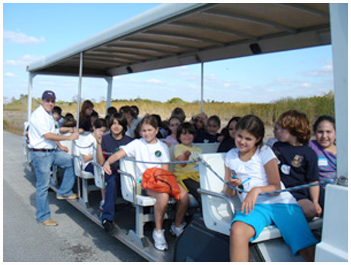 Our Everglades exploration adventure charts a historical course through this unique ecosystem that is vital to Florida’s natural systems. As we arrive at the Miccosukee Indian village and meet our Miccosukee guide, we begin to learn the “real story” behind such famous historical practices, like alligator wrestling. Exploring the recreated village and museum, we begin to understand the amazing culture of the people who have lived in this remarkable area for generations. A guided ride on an airboat into the River of Grass gets us up close and immersed in this amazing ecosystem, where we can better understand what living there would be like.

Following lunch and a short ride later, we enter Everglades National Park to explore the unique Shark Valley area. Boarding the tram for our 2-hour adventure, we have the opportunity to loop deep into the park on a specially-paved path. As we spot many bird species and countless alligators, the rangers share the stories of the special geological history and environmental significance of this area of the Everglades. Returning to school, we compare notes about what we have seen and learned in this important ecosystem and what it might be like to find a home within it.

SC.3.N.1.3 Keep records as appropriate, such as pictorial, written, or simple charts and graphs, of investigations conducted.

SC.3.N.1.7 Explain that empirical evidence is information, such as observations or measurements, that is used to help validate explanations of natural phenomena.

SC.3.N.1.1 Raise questions about the natural world, investigate them individually and in teams through free exploration and systematic investigations, and generate appropriate explanations based on those explorations.

SC.3.N.1.2 Compare the observations made by different groups using the same tools and seek reasons to explain the differences across groups.

SC.3.P.8.1 Measure and compare temperatures of various samples of solids and liquids.

SC.3.N.3.1 Recognize that words in science can have different or more specific meanings than their use in everyday language; for example, energy, cell, heat/cold, and evidence.

SC.4.E.6.5 Investigate how technology and tools help to extend the ability of humans to observe very small things and very large things.

SC.4.N.1.2 Compare the observations made by different groups using multiple tools and seek reasons to explain the differences across groups.

SC.4.N.1.5 Compare the methods and results of investigations done by other classmates.

SC.4.P.8.2 Identify properties and common uses of water in each of its states.

SC.8.N.1.4 Explain how hypotheses are valuable if they lead to further investigations, even if they turn out not to be supported by the data.

SC.8.P.8.8 Identify basic examples of and compare and classify the properties of compounds, including acids, bases, and salts.

SC.912.L.17.19 Describe how different natural resources are produced and how their rates of use and renewal limit availability.

SC.912.L.17.20 Predict the impact of individuals on environmental systems and examine how human lifestyles affect sustainability.
SS.912.G.5.6 Analyze case studies to predict how a change to an environmental factor can affect an ecosystem.

SC.3.N.1.4 Recognize the importance of communication among scientists.

SS.3.E.1.3 Recognize that buyers and sellers interact to exchange goods and services through the use of trade or money.

SC.912.L.17.12 Discuss the political, social, and environmental consequences of sustainable use of land.

SC.912.L.17.15 Discuss the effects of technology on environmental quality.

SC.912.L.17.18 Describe how human population size and resource use relate to environmental quality.

SS.912.C.2.4 Evaluate, take, and defend positions on issues that cause the government to balance the interests of individuals with the public good.

SS.912.C.2.8 Analyze the impact of citizen participation as a means of achieving political and social change.

SS.912.G.2.5 Use geographic terms and tools to analyze case studies of debates over how human actions modify a selected region.

SS.912.G.3.3 Use geographic terms and tools to explain differing perspectives on the use of renewable and non-renewable resources in Florida, the United States, and the world.

SS.912.G.5.2 Analyze case studies of how changes in the physical environment of a place can increase or diminish its capacity to support human activity.

SS.912.G.5.4 Analyze case studies of how humans impact the diversity and productivity of ecosystems.

SS.3.G.2.6 Investigate how people perceive places and regions differently by conducting interviews, mental mapping, and studying news, poems, legends, and songs about a region or area.

SS.912.H.3.1 Analyze the effects of transportation, trade, communication, science, and technology on the preservation and diffusion of culture.