Looking Back in Time – 1 Day Trip 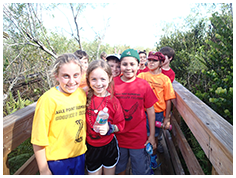 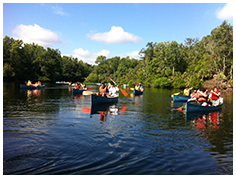 Students will become “Wildlife Biologists” and “Historians” as they spend an exciting day exploring the Loxahatchee River and surrounding woods and fields at Riverbend and Loxahatchee River Battlefield Park. On the calm and tree lined river, we will master the skills of canoeing, study the ecological relationships between organisms and understand the importance of rivers on human settlement. We’ll identify native plants and discover their benefits to the Native Americans and pioneers. As we follow a trail through the forest canopy, we will observe animals by sight and sound and spy the remnants of old homesteads and other archeological remains. Heading to the site of the last standing battle in the Second Seminole War Students we’ll travel in the footsteps of Seminole warriors and Tennessee volunteers. We will head back to school reflecting on our adventures and completing a Seminole inspired craft!

SC.3.N.1.3 Keep records as appropriate, such as pictorial, written, or simple charts and graphs, of investigations conducted.

SC.3.N.1.7 Explain that empirical evidence is information, such as observations or measurements that is used to help validate explanations of natural phenomena.

SC.3.N.1.1 Raise questions about the natural world, investigate them individually and in teams through free exploration and systematic investigations, and generate appropriate explanations based on those explorations.

SC.3.L.15.1 Classify animals into major groups (mammals, birds, reptiles, amphibians, fish, arthropods, vertebrates and invertebrates, those having live births and those which lay eggs) according to their physical characteristics and behaviors.

SC.5.L.14.2 Compare and contrast the function of organs and other physical structures of plants and animals, including humans, for example: some animals have skeletons for support – some with internal skeletons others with exoskeletons – while some plants have stems for support.

SC.5.L.17.1 Compare and contrast adaptations displayed by animals and plants that enable them to survive in different environments such as life cycles variations, animal behaviors and physical characteristics.

SS.4.A.3.10 Identify the causes and effects of the Seminole Wars.

SS.4.A.3.2 Describe causes and effects of European colonization on the Native American tribes of Florida.

SS.4.A.3.8 Explain how the Seminole tribe formed and the purpose for their migration.

SS.3.G.2.6 Investigate how people perceive places and regions differently by conducting interviews, mental mapping, and studying news, poems, legends, and songs about a region or area.

SC.4.L.17.2 Explain that animals, including humans, cannot make their own food and that when animals eat plants or other animals, the energy stored in the food source is passed to them.