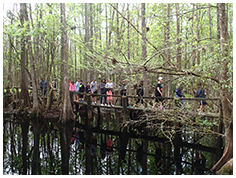 Students will visit the Fakahatchee Strand Preserve State Park, “the Amazon of North America.” Here they will become “wildlife biologists” as they slog through a cypress slough and observe many rare and endangered plants and animals along the way. Students examine the hydrological connectivity of the Fakahatchee Strand to the greater Everglades ecosystem as they travel to the Miccosukee Indian Village. Here students will begin to learn about the people who inhabit the Everglades, including the “real story” behind the historical practice of alligator wrestling. “Wildlife biologists” will be immersed into the River of Grass as they take an airboat ride to get an up-close look at this amazing wetland marsh. Returning to school, compare notes about what they have seen and learned in these important ecosystems.

SC.4.E.6.5 Investigate how technology and tools help to extend the ability of humans to observe very small things and very large things.

SC.4.N.1.2 Compare the observations made by different groups using multiple tools and seek reasons to explain the differences across groups.

SC.4.N.1.5 Compare the methods and results of investigations done by other classmates.

SC.4.P.8.2 Identify properties and common uses of water in each of its states.

SC.8.N.1.4 Explain how hypotheses are valuable if they lead to further investigations, even if they turn out not to be supported by the data.

SC.8.P.8.8 Identify basic examples of and compare and classify the properties of compounds, including acids, bases, and salts.

SC.912.L.17.19 Describe how different natural resources are produced and how their rates of use and renewal limit availability.

SC.912.L.17.20 Predict the impact of individuals on environmental systems and examine how human lifestyles affect sustainability.

SS.912.G.5.6 Analyze case studies to predict how a change to an environmental factor can affect an ecosystem.

SC.912.L.17.12 Discuss the political, social, and environmental consequences of sustainable use of land.

SC.912.L.17.15 Discuss the effects of technology on environmental quality.

SC.912.L.17.18 Describe how human population size and resource use relate to environmental quality.

SS.912.C.2.4 Evaluate, take, and defend positions on issues that cause the government to balance the interests of individuals with the public good.

SS.912.C.2.8 Analyze the impact of citizen participation as a means of achieving political and social change.

SS.912.G.2.5 Use geographic terms and tools to analyze case studies of debates over how human actions modify a selected region.

SS.912.G.3.3 Use geographic terms and tools to explain differing perspectives on the use of renewable and non-renewable resources in Florida, the United States, and the world.

SS.912.G.5.2 Analyze case studies of how changes in the physical environment of a place can increase or diminish its capacity to support human activity.

SS.912.G.5.4 Analyze case studies of how humans impact the diversity and productivity of ecosystems.

SS.912.H.3.1 Analyze the effects of transportation, trade, communication, science, and technology on the preservation and diffusion of culture.