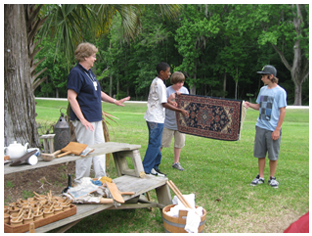 Departing early, we board our coach bus and head north, stopping for breakfast along the way. As we make our way across the Florida border, we travel through the tree-lined roads of Georgia, stopping for lunch on our journey to the fascinating historic coastal town of Charleston, South Carolina. After checking into our hotel, we enjoy dinner at a local restaurant and prepare for the next morning’s adventure. After breakfast, a carriage tour of the city helps us survey the sights and soak up the history of the area. After the tour acquaints us, we delve deeper into the historic past, visiting the old exchange and market, together with the old slave mart. Following our local lunch, we will spend the afternoon exploring the buildings and grounds of Drayton Hall and Magnolia Plantation, experiencing the magnificence and unsettling realities of the past in the American South. After returning to town for dinner, the Bull Dog walking ghost tour rounds out a day filled with thoughts from the past and adventures in the present. 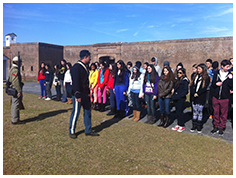 After a restful night’s sleep, it’s all aboard after breakfast! Spiritline Cruises will ferry us safely across Charleston harbor to explore Fort Sumter, the historic site of the first shots fired in the Civil War. Our historic military adventure continues as we enjoy lunch aboard the USS Yorktown aircraft carrier in the crew mess hall and tour Patriots Point Naval and Maritime Museum. The day ends with some much-needed relaxation and preparation for the next day’s journey.

After breakfast, we leave fascinating Charleston and travel to beautiful and historic Savannah, Georgia. We get acquainted with Savannah’s unique network of streets and squares on our trolley tour of the city. Planned and built by Ogelthorpe in the 1800s, Savannah was the first city of it’s kind in this area. Before a hearty lunch, we visit the First African Baptist Church, exploring the history of Georgia’s oldest African American community and their settlement in Savannah. Our afternoon offers us a chance to explore many of the city’s important sites including the Savannah History Museum, the Roundhouse Railroad Museum and Battlefield Park. After checking in to the historic Savannah Doubletree Hotel, we’ll set out to stroll along the riverfront where we find an open market with local vendors to explore. After a delicious dinner at the Pirate’s House restaurant, our day’s exploring wraps up with a trolley ghost tour of the legendary streets and shadowy squares of what locals claim is one of the most haunted cities in America – a perfect end to our historic day.

After breakfast, we set out to discover two historic landmarks, the Juliette Gordon Low birthplace, where we learn the family story of this Girl Scout founder, and the Telfair Museum of Art, where we are taken on a tour of this historic house. We say goodbye to the rich history and unique architecture of Savannah, Georgia with spectacular views of the saltwater marsh ecosystem as we enjoy lunch at the Crab Shack. A local favorite, the restaurant is poised on stilts and offers us an opportunity to survey the wildlife of this natural area. Arriving home after a dinner rest stop, we are full from our experience discovering the details of two of our nation’s most interesting southern cities!